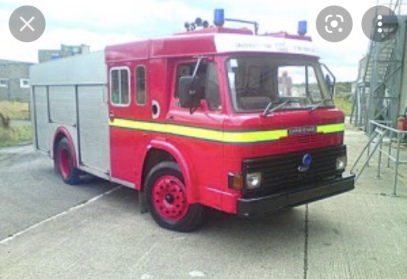 Picture of WEY 329V based at Octel Amlwch.

WEY 329V First registred in 1979 to North Wales Fire Service and was based in Llandudno fire station.

After retiring form the fire service in the early 90's it was then purchased by Great Lakes Octel in Amlwch and was kept on site for any emergency incidents.

The Octel site in Amlwch closed its gates for the final time in March 2004, the D series was then donated to Parys Training LTD Amlwch. After being stood in a field in Cemaes for a number of years, the decision was then made to donate the appliance us the Society in December 2016 to secure its future.

Eric Lloyd Commercials kindly offered their services to go and recover the sorry looking D Series from the field and bring it back home to Dolwen.

At first the engine wasnt running when she arrived but after a bit of tinkering by our own members we had a running engine and she was mobile, this meant we could get it into the shed out of the elemets until we had time to progress further. The project had been on stop until the winter of 2021 where our members meet every Tuesday 10am at Dolwen to do some work or even just stop by have a chat and a cup of tea.

Work planned to be carried out on the appliance between other projects within the Society.

Our first task was to check basic fluids and function of the engine, does it turn over, is there oil etc.

This didn’t prove a flying start as we couldn’t get the cab over – the lock was unscrewed behind the seats, gear lever rotated to tilt position and the emergency latch lifted but the cab was stuck fast, as much effort and shoulder power we could apply didn’t make any difference, solid.

We suspected it was just ‘stuck’ due to lack of use and corrosion and so we placed a jack under each side of the cab and gently applied pressure to see if the cab would lift at all – sure enough it gradually came away inch by inch to the point we were able to lift it over fully and lock it into the tilted position.

Lots of rust and corrosion was evident but we hope and suspect mainly on the surface and should be able to be cleaned up in the main.

A coolant leak was evident from the heater hoses so next job to remove the hoses and see what’s going on, jubilee clips won’t move so looks like it will be a hacksaw job.

The engine turns over by hand but the batteries are consigned to the bin so we plan to ‘borrow’ a couple of tractor batteries and see if it will turn over under its’ own steam.

That’s the status so far, will update as we get time and progress is made.

Well, back to it after the new year - taken a few weeks with one thing and another...

Still having a few troubles with water leaks and the clutch cylinder is stuck fast but we decided to stick with getting the engine firing up if we could.

The starter motor was disengaging too quickly to rotate the engine long enough to start, but it felt like it wanted to go - so we persevered – thanks to a couple of batteries kindly donated by Phoenix Metals we had enough power to try a good few spins of the engine, each time trying just a little bit more, until it picked up... and ran... A few faces emerged from our workshop followed by a cloud of billowing white smoke (a bit like 'starts in their eyes' - tonight Matthew, we're going to be....) – but we did it, the engine was running and after warming up a bit sounded really well.

Next steps, we’re going to get the wheels off the floor and see what turns and what doesn’t vs what is supposed to turn and what isn’t !!  And then in parallel we’ll get the clutch cylinder off and try and get some replacement unions for the leaking heater hoses etc.  Plenty to do still.

All in all a successful day at the office.

The Fire Appliance is now jacked up off the floor and wheels turning, albeit a little stiff – brakes are on the list of things to do.  We keep finding a few leaks here and there from air and water, will deal with those as we go along.

Starter motor continues to be troublesome and disengages before the engine fires up - so that has been removed and on the bench for strip down.

The exhaust had to be removed to enable the starter to come off but unfortunately if fell to bits during removal – feels like we’re making more work than we’re fixing at times, but slowly and surely is the plan.  We try and do a bit more each week when a few of us get together on a Tuesday morning at our workshop in Star, Gaerwen.  Come and join us if you want to, it’s a friendly club - all welcome any age / ability / experience.

The day we took over ownership of WEY329V looking very sorry.

Visit our Membership page for more information about joining AVES.


Our new Chairman is Alan Wilkes.
Alan has prior experience as a Chairperson on a much larger scale, has the interest of members at heart and wishes to boost membership of the society, involve members more in social events and regular working days at the home of AVES Dolwen, Star!
Alan is friendly and approachable so why not come along and possibly just have a cup of tea and a chat?

Best of luck to you all!